I've been slightly MIA lately since we just moved into the new house! Drew and I have been up to our eyeballs in projects and painting, but I'm hoping to get house pictures up soon and Hunter's 2 month post up on time. Here are some pictures of what my sweet ( and sometimes not so sweet. Terrible twos anyone?) littles ones have been up to since the move. 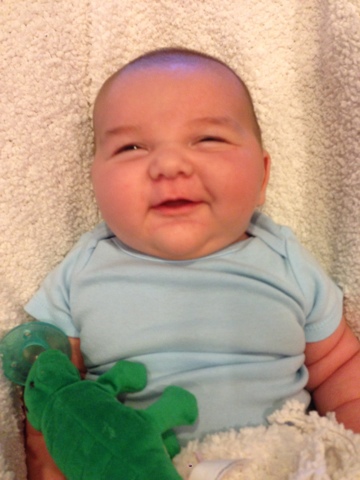 Smiling for mama! He loves sitting in the high chair, it's almost a guarantee you'll get smiles from him in there :) 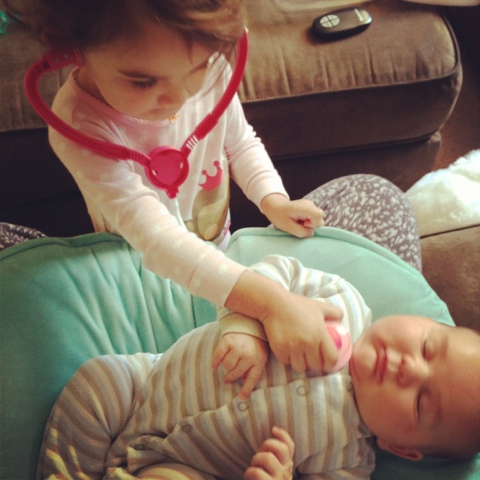 Claire is slightly obsessed with her doctor kit lately, and has been enjoying the fact that her brother can't get away from her for "check ups" ;) 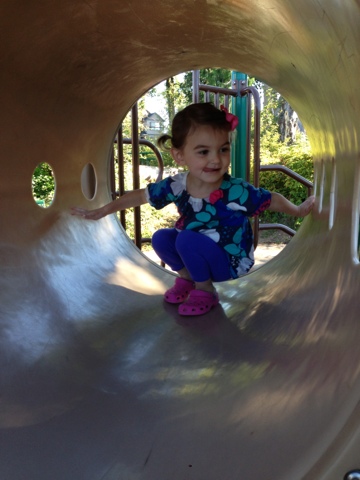 Exploring our neighborhood park! I can't even explain how blessed we feel to be in such a family friendly neighborhood.
Posted by Ashleigh at 1:18 PM No comments:

Oops! This post is about a week late, but we're living in 'getting ready to move' chaos, so I'm a little slow!

Let me start off with my typical, cliche, "holy cow, I cannot believe it's been a month!".

But really, how did time go by this fast?!
It's such a weird feeling, because while time went by so fast and Hunter feels like he's been part of our family forever, it also feels like just yesterday we were headed to the hospital to meet our little bundle.

Here is what our little man has been up to in his first month of life:

-First and foremost, he has been packing on the pounds. I mean this kid has some serious rolls and Drew likes to joke that he's working on his triple chin ;)

-Obviously packing on the pounds means Hunter is eating all the time! He eats about every 2.5-3 hours around the clock, which means we aren't getting much sleep.

-Every night from about 7-10pm is his fussy period. He finally goes to sleep around 10:00 and then typically wakes around midnight, 2:30-3 and then again around 6:00. It sure makes for a long night!

-Hunter is such a trooper when it comes to dealing with Claire. She wants to love on him all the time and he takes it like a champ. He did try to latch on to her nose the other day when she was kissing him while he was fussing, luckily she thought this was hilarious!

-The hair dryer has become a life saver when Hunter is fussy. As soon as I turn it on he becomes totally mesmerized and sits contently in his bouncy seat.

-Hunter is a tummy time champ! He is crazy strong and as been lifting his head since he was born, so I think tummy time isn't as uncomfortable for him as it was for Claire. He will go about 5-10 minutes being totally content on his tummy, which is a total 180 from his sister, who would cry within the first minute!

-He ROLLED OVER! Holy cow, I thought it was a fluke the first time, but he has now rolled over about 5 times from tummy to back. This kid is a beast!

Posted by Ashleigh at 6:12 PM No comments: