Since I am so behind on posting about Christmas and all our other Christmas festivities, I am going to be lazy and compile them all into one post!

We spent a Saturday making "gingerbread" houses. I wasn't sure how into Claire would be so I opted to just use graham crackers and save myself the time of making gingerbread in case our plan failed. Claire had lots of fun decorating, but I think her favorite part was shoving all the candy in her mouth as fast as possible! I had to remind her to put some on her house too :) 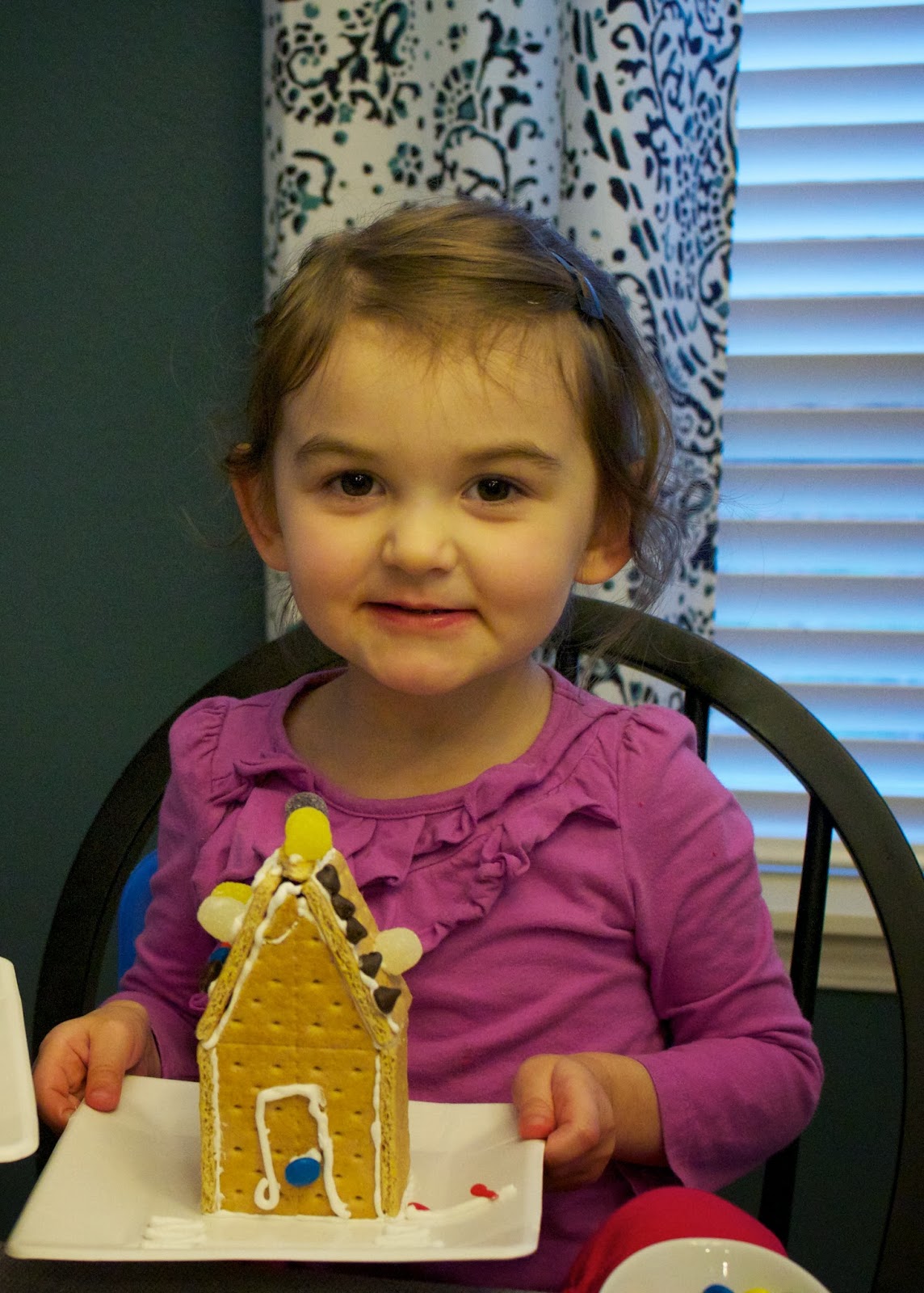 Oh, and Hunter had fun too! 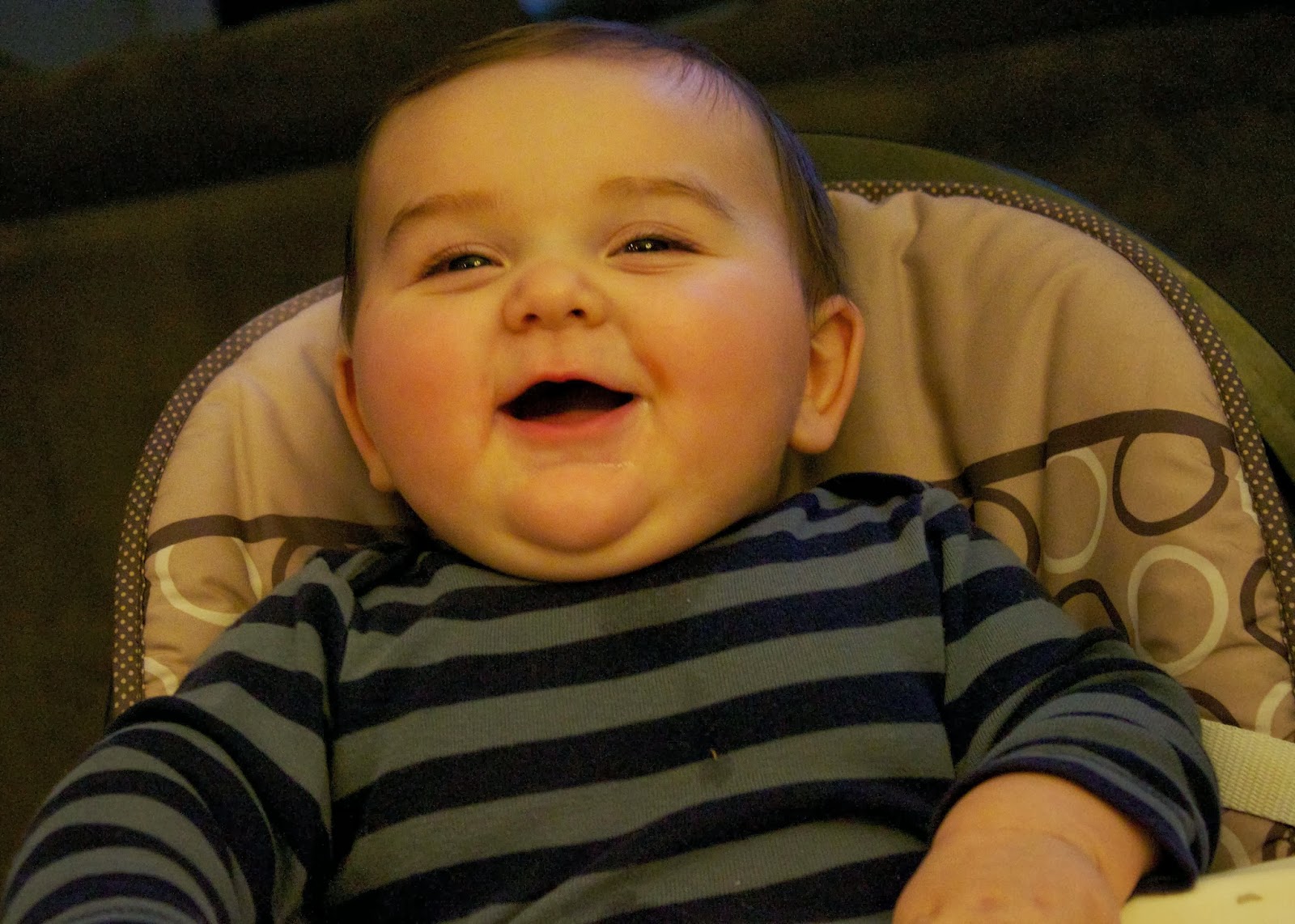 The next weekend we had our family Christmas with my mom's side of the family. Growing up all the cousins would get together and we'd get to set up the nativity that my grandparents have had since my mom and her sisters were little. It was always a fight over who got to hang the angel so we had a rotating list going. Well we're all older now, so Claire got to help nana set up the nativity and hang the angel this year. 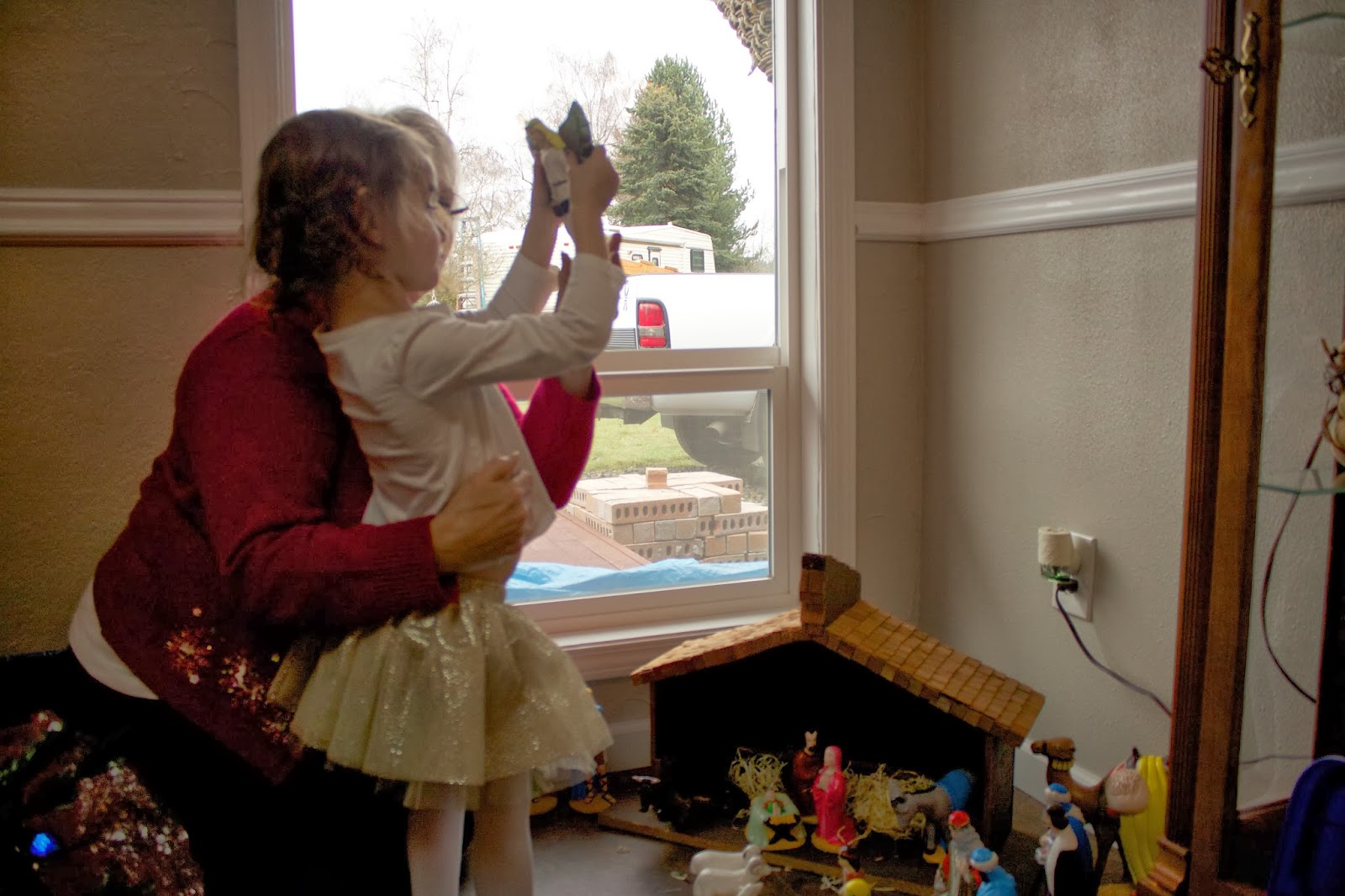 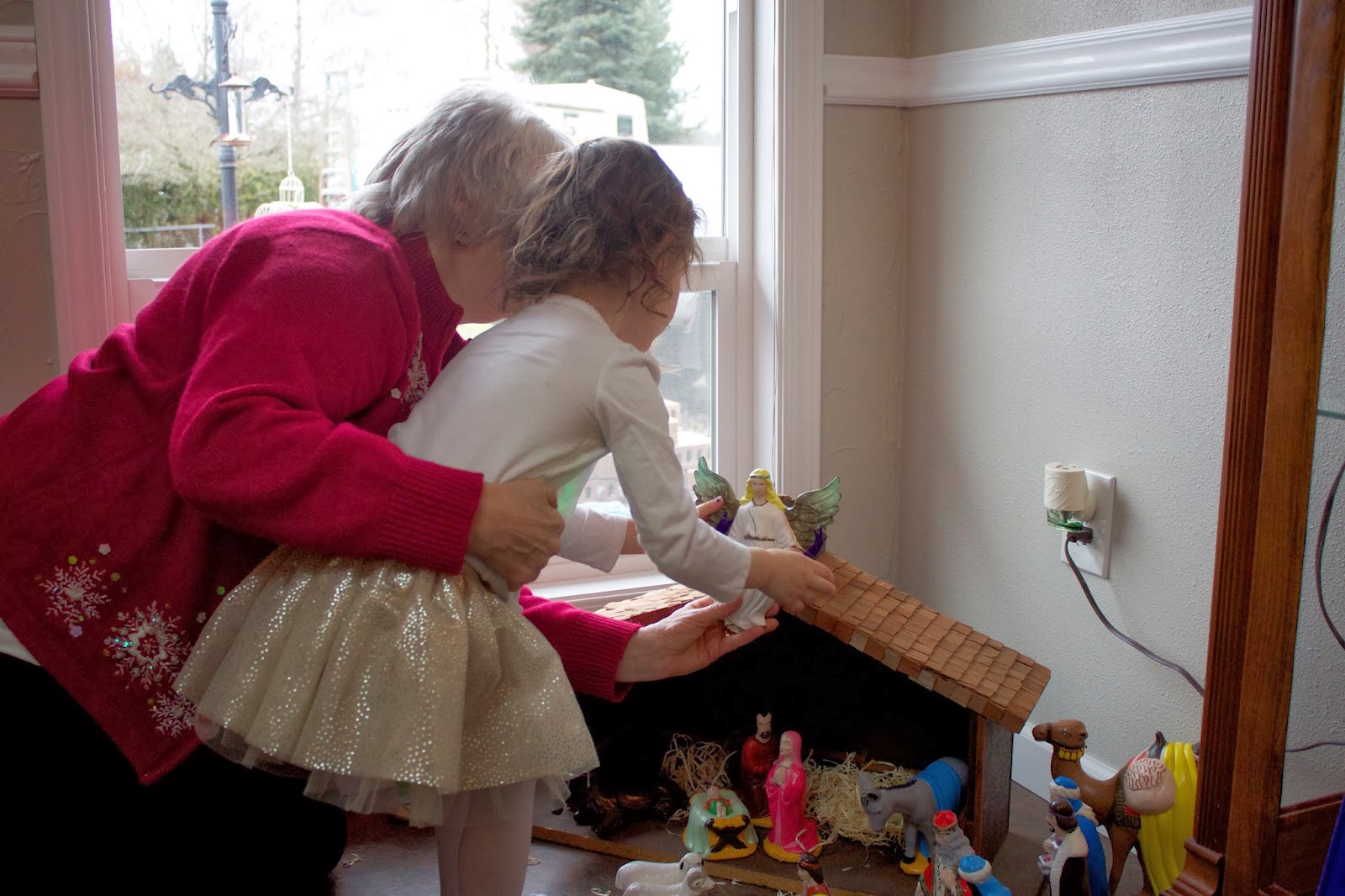 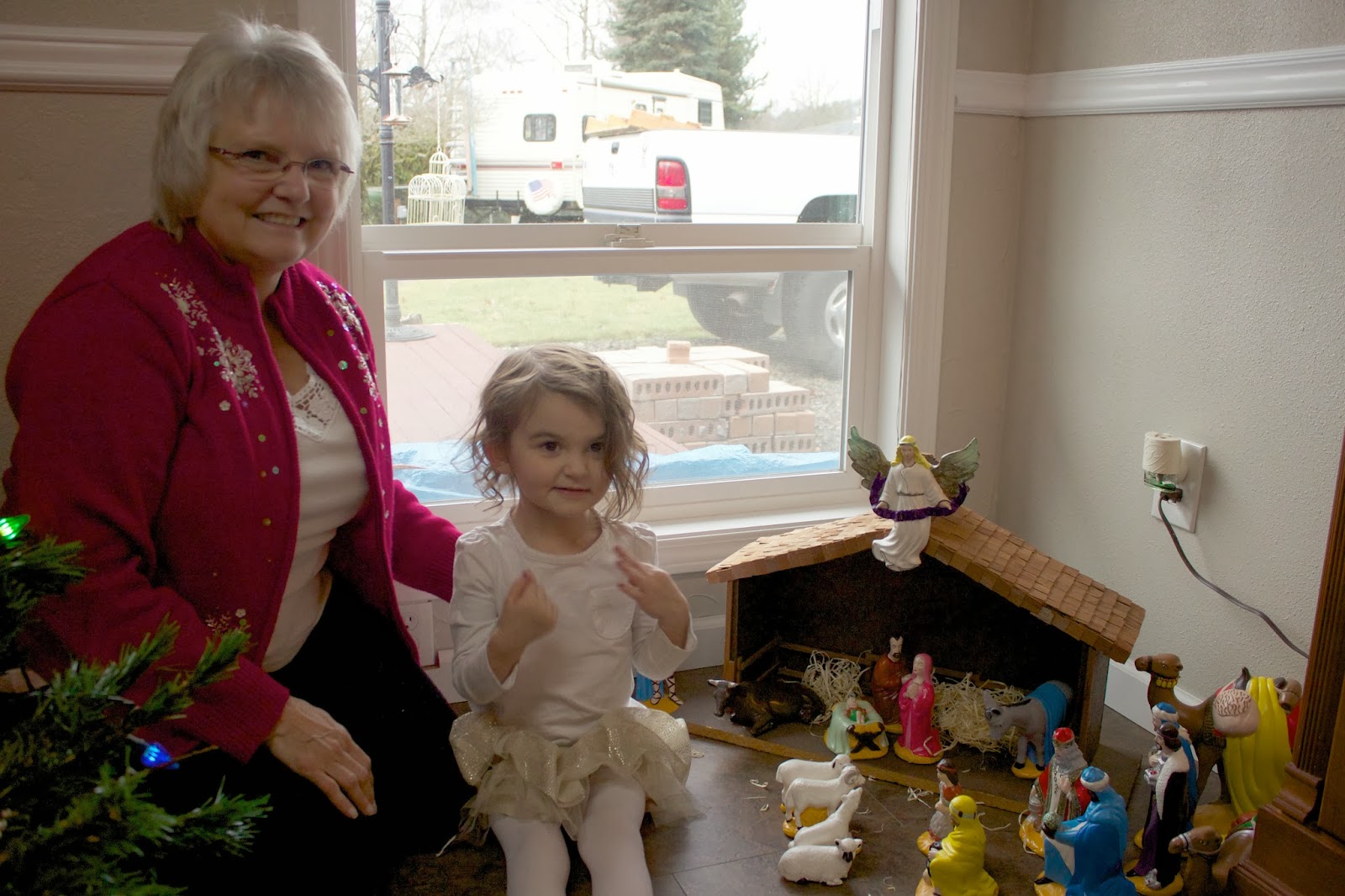 On Christmas eve we went over to my Dad's and Step Mom's house, but apparently even though we took the camera we never got any pictures! I blame it on the fact that Hunter was keeping us on our toes with his attitude that night!

Drew's parents were able to come over from Bend for Christmas, so after Christmas eve service they made their way to our house. It was so fun to have them there with us for Christmas morning!

We hosted Christmas dinner with my parents, brother, and Drew's parents on Christmas day, and in the frenzy of making sure we had everything for dinner I totally forgot about Christmas breakfast! We were down to one egg, but I miraculously had everything to make my Mom's caramel rolls (which was always a Christmas tradition growing up) so it ended up working out perfectly! I'll have to be more prepared next year haha.

Drew and I wanted to make something for Claire for Christmas, so we decided on a barbie doll house. It was a lot of work, but a lot of fun! We spent many a late nights together working on it, and I think we were both relieved to see that Claire loved it! It was hard to get her to open any of her other presents because all she wanted to do was play with the doll house. I'll do a separate post about it later :)

Hunter had a good Christmas too, he thoroughly enjoyed shoving wrapping paper and bows in his mouth as fast as possible in hopes that mommy and daddy wouldn't catch him. Sorry bud! 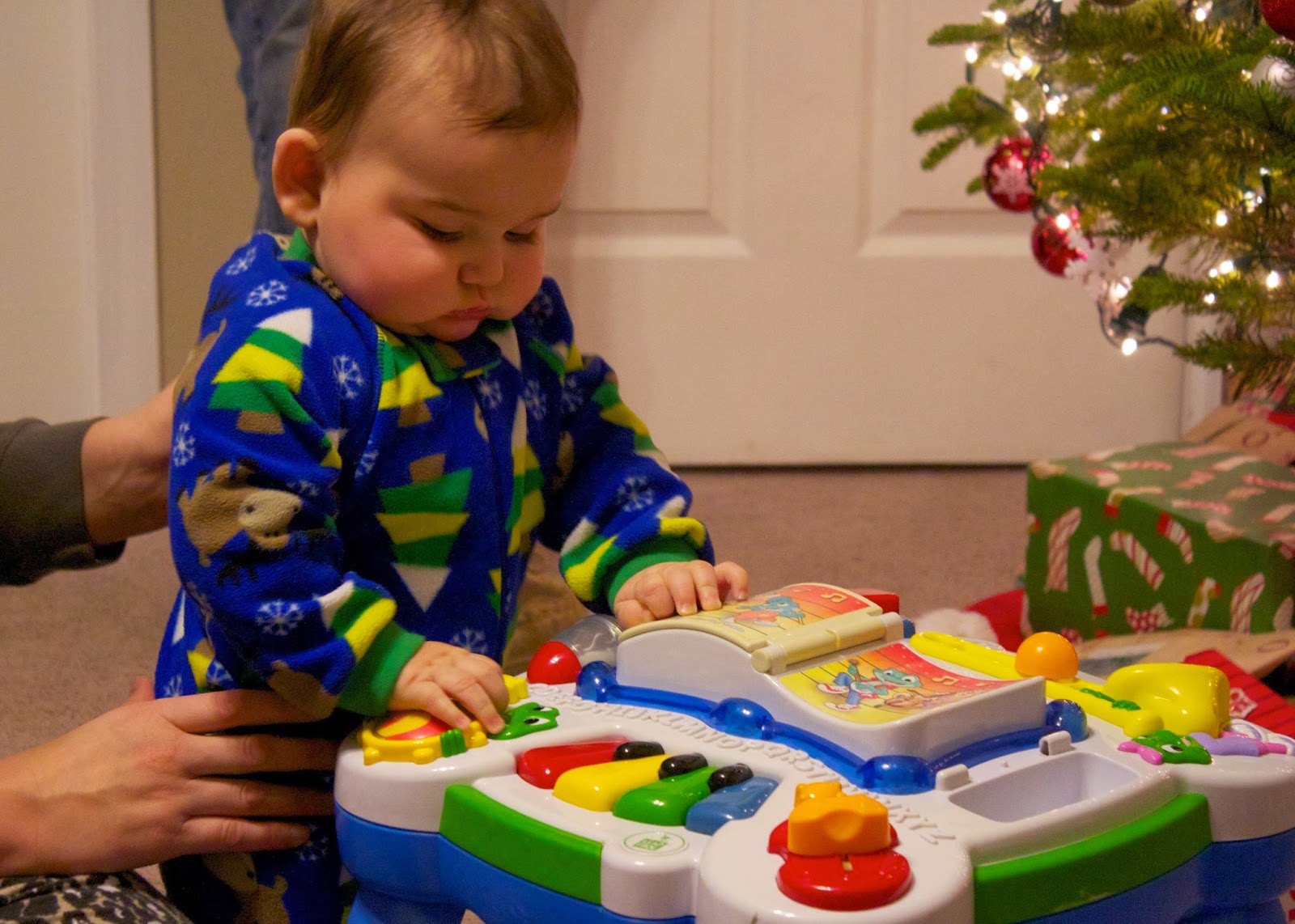 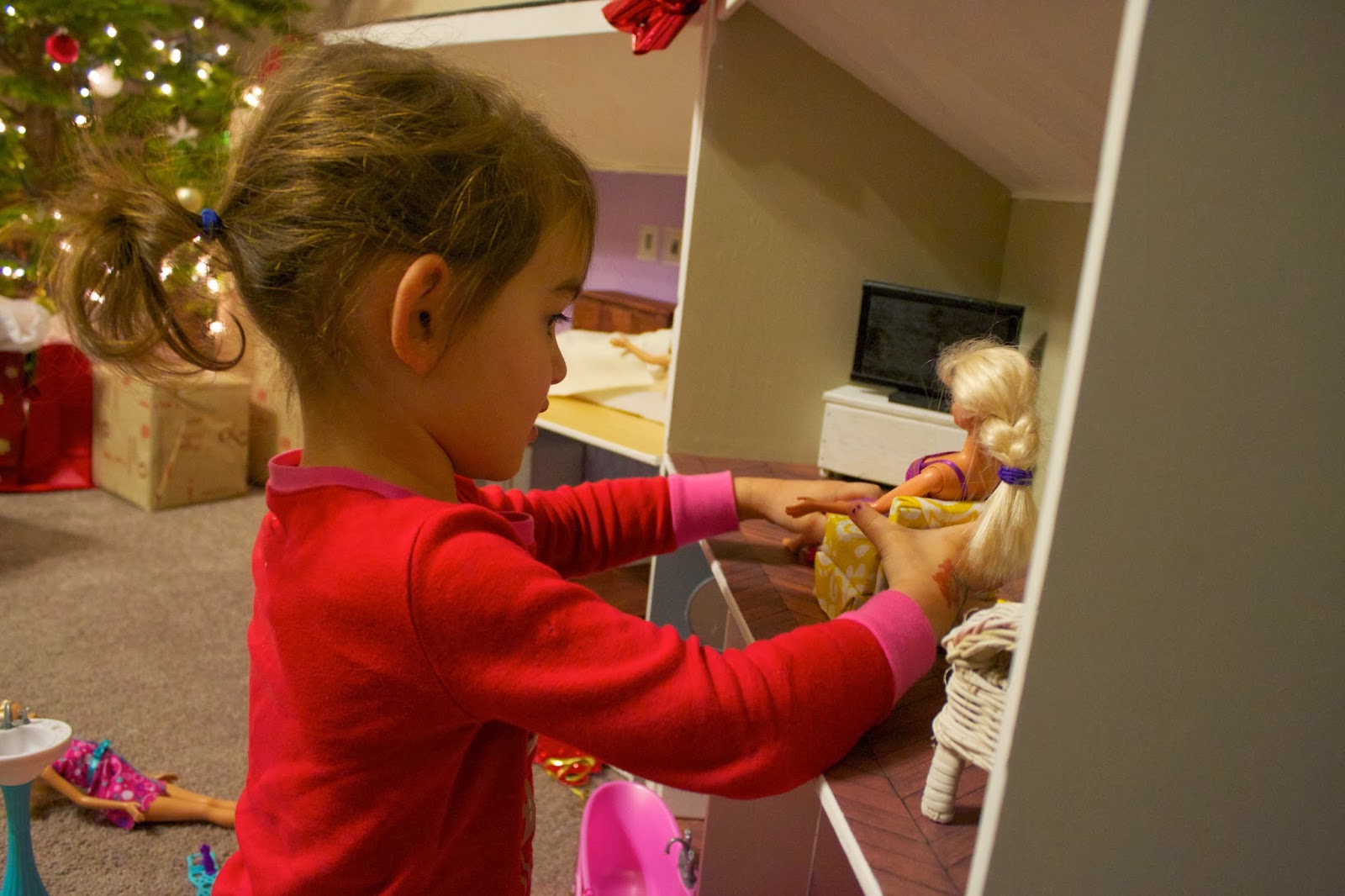 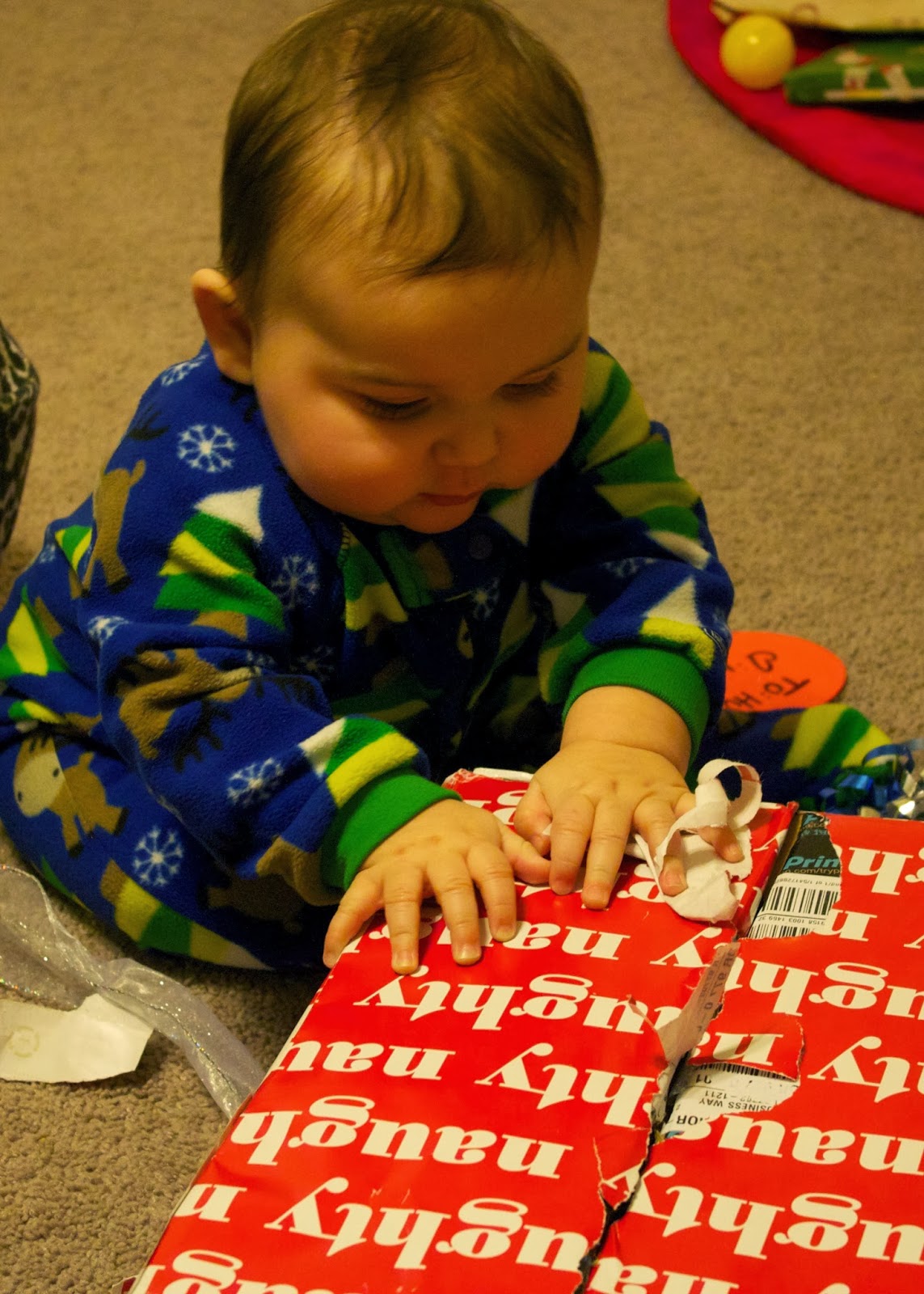 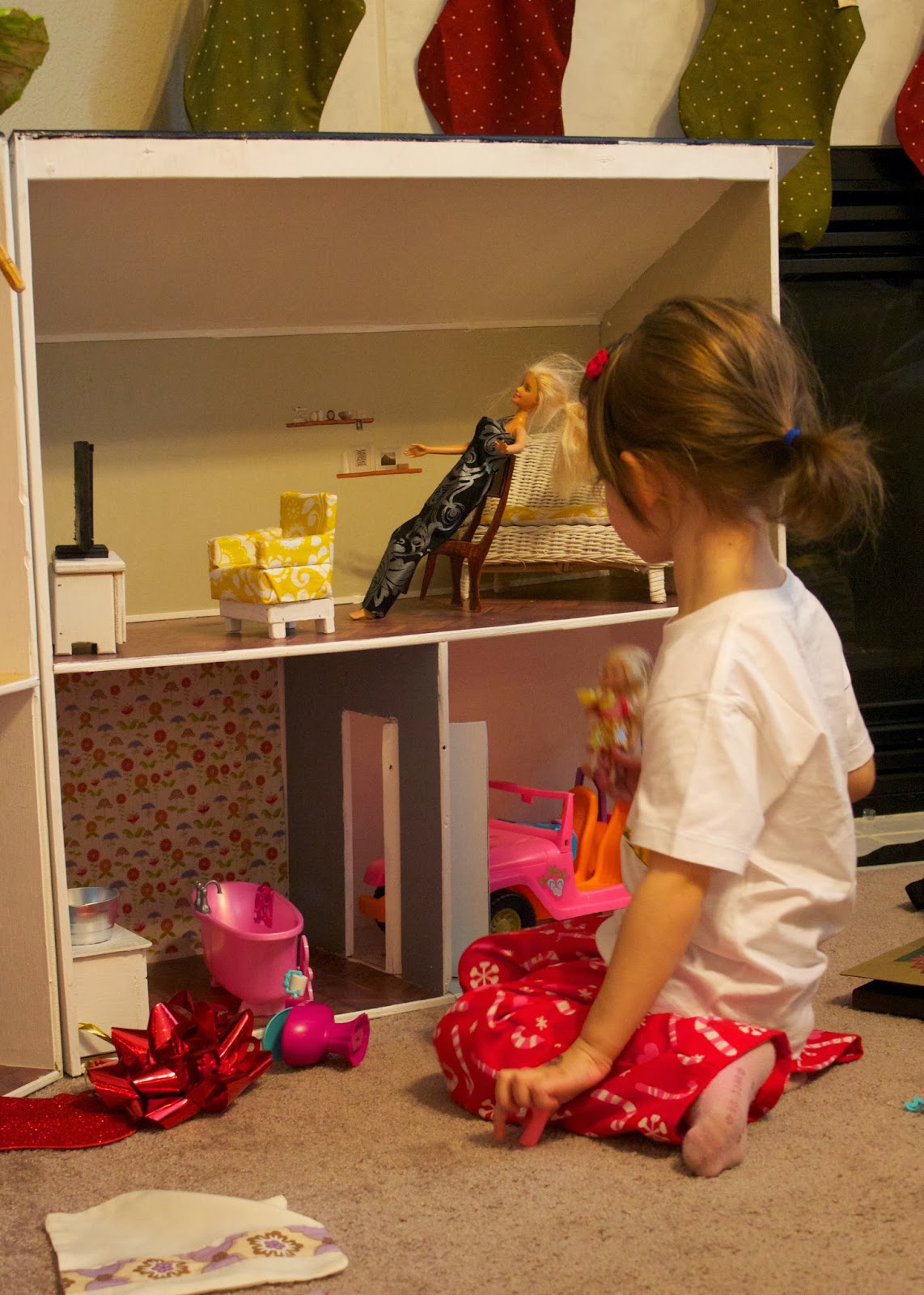 The end of the day was a little rough since Hunter cut his first tooth. We had all the classic symptoms, including some lovely diaper rash, so we ended our Christmas with a little naked time :) 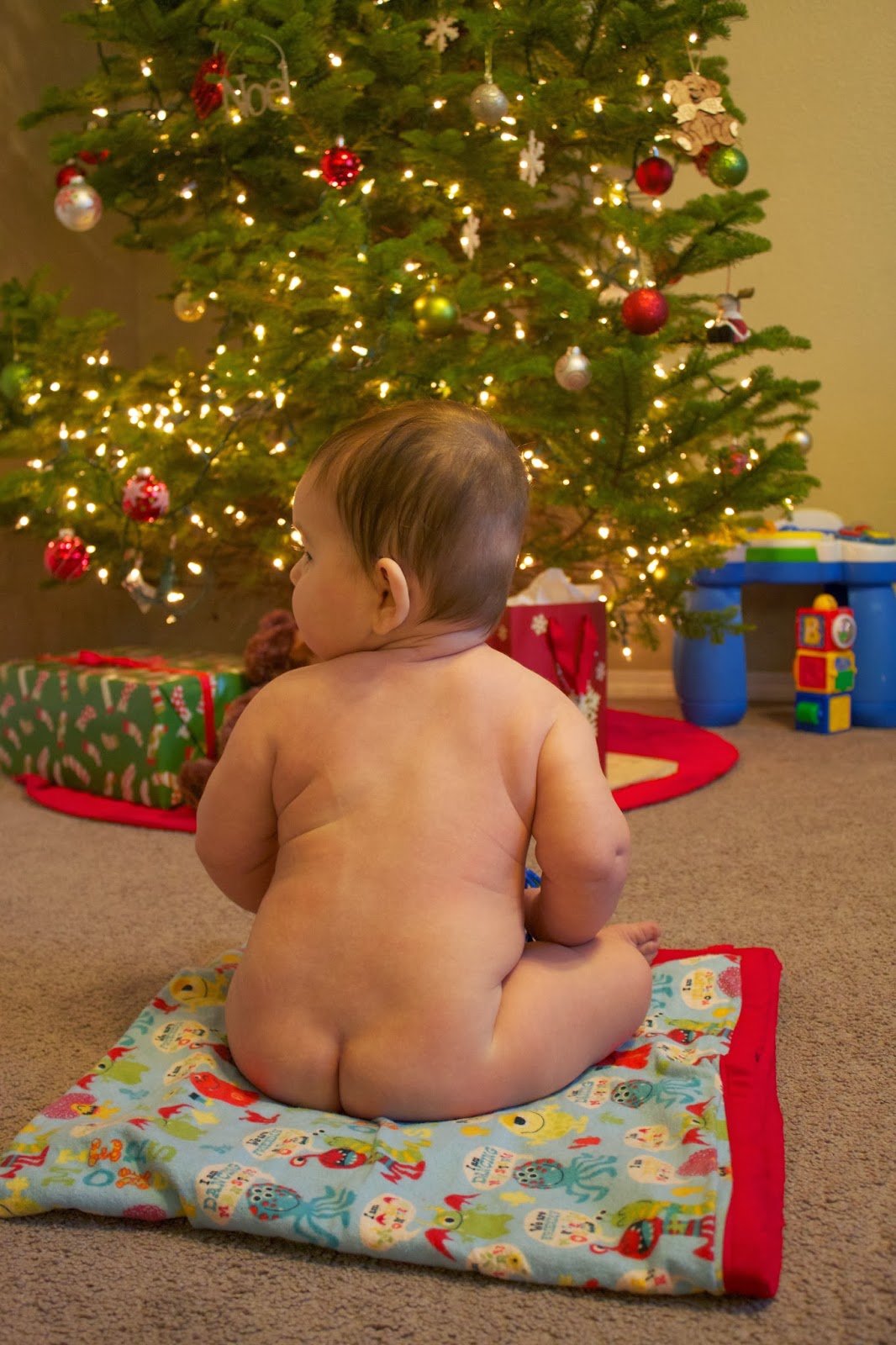 Christmas felt so much more magical this year; I think Claire is at that perfect age where everything seems so amazing, and it really made Drew and I excited to watch her experience it all. I'm already excited for next year!

Posted by Ashleigh at 6:40 PM No comments:

Little man is 7 months! This month has probably flown by faster than any other month; I blame it on Christmas!

-We now have a sitter. I kinda expected Hunter to not really be sitting for another month, since he did not seem interested at all, then one day he just decided he was going to sit and has been ever since. He still topples over every once and a while, but he's pretty happy to sit steadily and play with his toys. 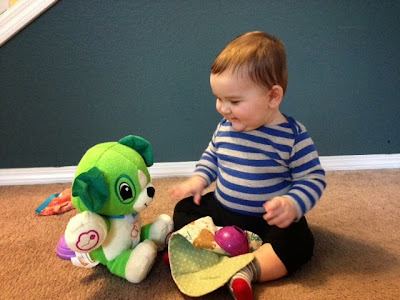 -Hunter has his first Christmas this month! He was only slightly amused at the whole process, but of course has a blast with all his wrapping paper :) 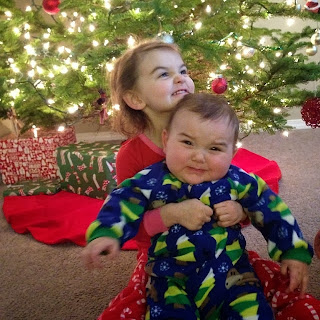 Can't you feel the Christmas spirit? At least Claire was excited! 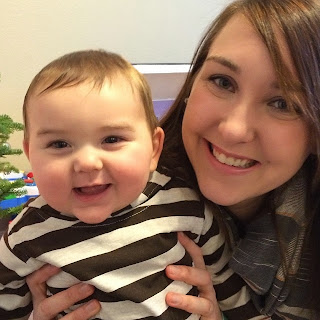 My sweet little guy on Christmas; a happy moment between the teething meltdowns.

-He cut his first tooth on Christmas! Poor guy has been a real grump since then, but we've been able to manage pain with some Tylenol, Sophie the giraffe and cold apple slices. He's had pretty much every teething symptom in the book and his crankiness is crazy, so I'm thinking of trying an amber teething necklace for him, since I know this is only the first of many teeth to come! 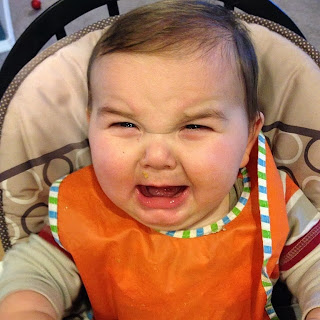 -Sleep in slightly better, but of course teething has thrown a wrench in that routine. We typically do a dream feed before we go to bed around 10:00pm  and then Hunter wakes anywhere between 3:30-5:00am to eat again. I have to just keep reminding myself that we will sleep again someday!

-Hunter's been enjoying more solids along with his puree's. He's had some banana and sweet potato chunks as well as some other random foods. He also started eating puffs which has proven to be a good distraction at dinner time :) He can only pick them up and get them in his mouth on his own about 20% of the time, but he sure enjoys trying!

-I think we're getting close to crawling! Probably another month or two, but he's able to get up onto his hands and knees and rock back and forth, and he's able to push himself backwards.
Posted by Ashleigh at 10:24 AM 1 comment:

Claire turned 2.5 on Christmas! Since I don't do monthly posts for Claire anymore I feel like I forget a lot of things that she's doing.

I cannot believe what a grown up girl we have! Every day Drew and I are amazed at how much her personalty is growing. Here is what Claire has been up to the past 6 months:

-Claire REALLY loves Hunter. She's always wanting to know where he is and insists on giving him hugs and kisses all day long. We're pretty sure she thinks his name is "buddy" since we call him that so often. She loves to come in the room and yell (at her highest pitched voice) "Hi Buddy! I love you! 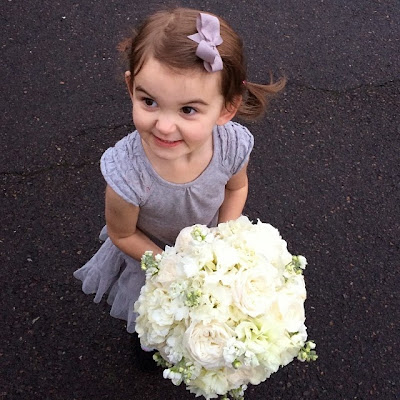 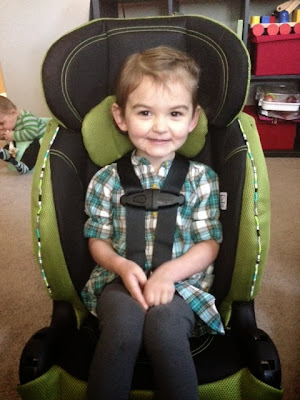 She was so excited about her new "big girl" carseat that she insisted on sitting in it before we even had a chance to put it in the car!

-Potty training! After a few times struggling with Claire to use the potty, she decided to do it on her own. Everyone told me "when she's ready she'll do it, don't rush her", and boy were they right! Every time we tried to push the issue even a little bit, she let us know that she wanted nothing to do with. One day she just woke up and decided she wanted to wear big girl underwear, and walked right into the bathroom, pulled down her undies, sat on the potty and went pee. Drew and I were both in shock for a few days, and kept expecting her to revert back, but so far so good! We're going on about 2 months of being potty trained. She is still in diapers at night time and at nap, though she usually wakes up dry about 75% of the time after nap.

-Within the last 6 months Claire's imagination has really taken off. It's hilarious to hear her little stories that she makes up, and she's always asking us to come along on her make believe adventures.


In case you can't understand what she's saying, she's grabbing her gold doubloons, and then telling me we're going to pirate island. She went through a big pirate phase for a while ;)

-We're getting to the point that sharing is really hard. Claire has a hard time understanding that not all of the toys belong to her. We often find her trying to take a toy from Hunter because she thinks it belongs to her. She is doing better, but I know it will be a work in progress for many more years to come; sharing is hard sometimes!

-Princesses are a big hit in our house right now. Crowns and tutu's are a must as well as anything sparkly. We've discovered that Claire has plenty of self confidence as she will often tell us "Look at me, I'm a beautiful princess!". 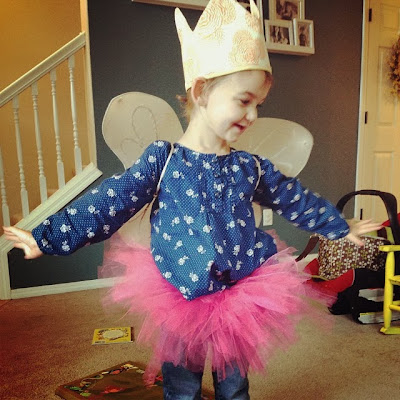 -Claire is still napping once a day, although some days she boycotts sleep and spends an hour or so in her bed having quiet time. Her schedule is pretty much the same as it has been for a while.
6:45-7:00am Wake up
12-12:30pm Nap time
6:30pm Bath time
7:00pm Bed time

-We put Claire in swim lessons at the local pool a few months ago. It's one of the first organized things Claire has done without us. In the past her swim lessons or classes have always been parent-child, but this time she is in the water with just the teacher and a few other kids. She does a fairly good job of listening but gets distracted by what the other kids are doing. We have taken a break the last few weeks because of her poor attitude; by the end of class she is whining to get out and be with me, which a new thing for her. We had Claire apologize to her teacher for her poor attitude and decided we'll try again in a few weeks.
-Claire is wearing size 3T clothing. She's so tall she could probably use the length of a 4T in pants, but so skinny she needs a 2T , so we've had to split it down the middle ;)

-Christmas was so much more magical with Claire this year! She was so into the lights, decorations, etc.... It was so much fun to see her be so excited and have a little more understanding of what is going on. 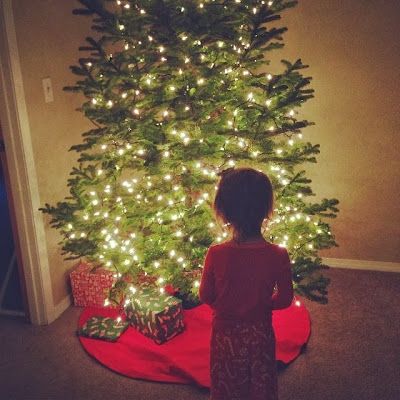 It's crazy to think that in a few short months we will have a 3 year old! I sure miss her being little, but it's also so much fun watching her grown and learn.